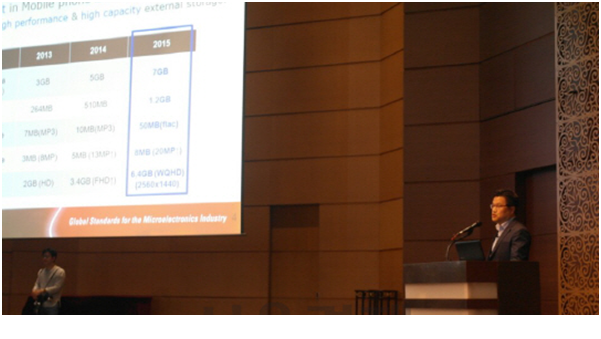 Samsung Electronics came up with a blueprint of Universal Flash Storage (UFS), a next-generation memory for mobile gadgets. The semiconductor giant is planning to take the lead in the future mobile device market by securing competitiveness in the UFS sector.

Samsung Electronics sketched out its future strategy on UFS in the Mobile & IoT 2016 Forum held in L Tower in Yangjae-dong of Seoul on August 17. “As King Arthur subjugated the whole nation with the magical sword Excalibur, the Excalibur of a future mobile world will be none other than UFS.” said Cho Hee-chang, a senior research fellow at the Memory Business Division at Samsung Electronics who made a presentation under the theme of next-generation mobile storages.

According to Cho, it is expected that all connected devices in the world will total 50 billion in 2020. In particular, Cho projected that the use of high-capacity and low-power consumption UFS will expand.

“4K or 8K cameras on drones make high-capacity storage devices essential parts.” Cho said. “The use of UFS will rise in production of VR contents or semiconductors for automobiles where camera sensors are very important.”

Both presenters said that Samsung Electronics will steadily lead the UFS market with its cutting-edge 3D NAND flash memories and high-performance controllers.

The Universal Flash Storage specification and additional information about it is available through the resources page.

Many representatives initiate the opportunity to represent their organization, adding to their own value as they: